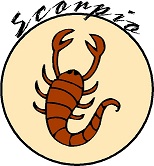 With the eighth sign of the zodiac we enter the middle of autumn, a season whose rains wither the leaves fallen on the trees to form the humus that will fertilise and allow the buried seed to germinate.

The Scorpion’s water, cloudy, apparently immobile, is the water of the swamps, still but pulsating with hidden life. Full of mysteries and unfathomable depths.

Scorpio is the sign related to the mysterious process of death, as a transit from one natural state to another: the transformation through the separation, conscious or forced, of what has been, to reach a new knowledge.

This complex and obscure symbolism is an indication of a complicated, tortuous nature, with a strong and imperious will, endowed with courage and attracted by risk, aware of its own potentialities and prepared to use them without too many moralistic scruples, like the sting of the scorpion, the animal’s weapon that is the symbol of the sign.

She uses the acute sensitivity and penetrating intuition that she is provided with to analyse with lucidity the reality and the people around her, judged with a critical sense that lacks pity.

Curious to know, he possesses an inquiring spirit that impels him to go deeper, to ask himself the why of things and to get to the root of them; he distrusts appearances and cares little for conventions, he aims directly at an objective and does not allow himself to be distracted or influenced, finding in himself the strength to go forward, because, in fact, he is the owner of important intimate resources and beautiful gifts of ingenuity and inventiveness.

Independent and tenacious, the native possesses extraordinarily deep-rooted opinions, he trusts only himself and the few people he loves, obstacles stimulate him and offers the best of himself in difficult situations, which allows him to challenge his own limitations; intimately restless, he is active above all mentally, in an incessant search for the deep meaning of things, motivated by the need to destroy in order to form again. Of a dramatic, turbulent and fighting nature, the individual, aggressive in his personal affirmation, is not afraid of hurting others and of being offended.

He is a born fighter, who spices up his battles with cunning, tactics and a touch of evil. His antipathies are assiduously cultivated, he does not worry about making enemies and does not adapt to impositions or circumstances that are unpleasant to him; on the contrary, he always tries to impose himself with his strong personality or with the skill he possesses to dominate others psychologically. Endowed with deep and tenacious feelings, he devotes himself with perseverance to the people he loves, with whom he is tremendously demanding, sometimes obsessive: he desires total possession of the loved one, of soul and body.

In fact, Scorpio is the sign linked to the creative force of sexuality, to the potency of the instincts; it is also a sign of power, seduced by positions of domination, which conquers and defends with provocative audacity and a total impassivity in the face of criticism. He is a difficult person to understand, because he is very jealous of himself, loves secrecy and mystery and lives intense and hidden emotions that manifest themselves in a sombre and brusque mood, not very prone to diplomatic subtleties and even less to trust and compassion.

This lack of benevolence can degenerate into excesses and contempt for others, a tendency to brutality and dangerous fits of anger. It can adopt a destructive and sterile attitude, its ambition running the risk of becoming a blind hunger for power. On the other hand the love of risk can make him commit dangerous recklessness and anti-conformism is liable to be mere provocation.

Sensuality and sexuality are tremendously important to this native. Nothing is more important to him than sex. But his intense passion is not only reflected in his high erotic intensity but also in his depth of love. A Scorpio in love, is a being totally devoted, his passion as devouring and deep as his sexual desire, joining to this an absolute fidelity if he has found the right person. Although for this native pleasure rules his life, he is not especially looking for adventure… or rather he will do so until he falls deeply in love. Then that person will be the One.

In spite of his faithful spirit, he may be tempted to fantasize about infidelity situations that could put the couple in danger, simply by living ‘dangerous’ emotions and situations from which, of course, he hopes to emerge victorious. In reality, for a Scorpio in love there are no half measures. Either you love and then everything. Or you don’t love and then nothing.

When you want something, you go for it without hesitation. His impulse is such that he almost always gets what he wants because it is really difficult to resist a seductive, persuasive, attentive and loving Scorpio. But, excessive in everything, a Scorpio can be easily prey of jealousy and in that occasion, no matter how much in love he is, he will show his anger and will not hesitate to attack, judge and condemn his partner, even if he is innocent. Let us remember that cruelty is one of the characteristic features of this native, whose emotions are always taken to the extreme.

Although very sure of himself and his goals, mistrust of others is permanent. And if he feels threatened, the others will fall first – even if the innocent fall into the lot – before he himself.

The native Scorpio saves no energy to achieve his goals and faces with determination the efforts and battles that fate presents; as fortune does not play a major part in success, the individual must rely, primarily, on his own strength.