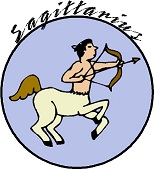 The season in Sagittarius is late autumn and already looks towards winter. Under the ground, the seed begins to germinate and to lodge in its protective wrapping, in nature the hope of the future life is ignited. The fire of Sagittarius is a light that illuminates the path towards a better future, the flame of faith in the future: a source of warmth and human sympathies, a spark of love for life.

Sagittarius is a sign of trust and benevolence, of expansion and security; animated by noble ideals, it ceaselessly seeks the highest meaning of things and, like the mythical centaur of its zodiacal symbol, it shoots its arrows ever further, towards ever new or even unknown goals. Of a simple, generous nature, very discreet in his manifestations and feelings, he loves sincerity, simplicity and very determined situations; his spirited vital drive is aided by exuberance, self-satisfaction and a sometimes exaggerated optimism.

Unthinking and not very astute, he throws himself enthusiastically into the most risky actions, remaining disappointed in the face of difficulties he had not foreseen in his hasty calculations. As he is not very constant, his will, which undergoes ups and downs, needs to be stimulated. Attracted by changes, by the encounter with what is unknown to him, Sagittarius is a sign linked both to the foreigner, to cultures and distant realities such as philosophy, religion, studies and higher interests.

Of an impetuous, reckless and enterprising nature, the native is loyal and generous, and attaches great importance to his own well-being, but equally values that of his neighbour; he has a lively sense of social and justice, and is often a convinced defender of traditional values, faithful to the laws and moral principles, which sometimes colours his attitude with conformity, because, in addition, he is much harder to judge others than to analyse himself. Being a person who is always active, who hates monotony, his vital rhythm is frenetic, galloping.

In the spiritual and physical field he needs to move in great spaces, his good predisposition to sport allows him, in addition, to unload his overflowing energies. Spirit and matter, idealism and earthly aspirations coexist in his nature: if on the one hand he is strongly attracted by material comfort and prosperity, on the other hand he does not abandon either his social and humanitarian ideals or his mystical-philosophical interests.

His personality is full of goodwill, honesty and kindness; he is cheerful, rather naive, and at the same time presumptuous and centralising, with a tendency to pontificate, to give advice, to protect by assuming the role of guide, with the sincere intention of doing good to others, but also with a great respect for matters of prestige and honour. Intellectually, the individual is restless, incited by ever new ideas which he tends to realise with often ill-defined projects, which are not always carried out.

The capacity for judgment and intuition and sensitivity are remarkable, but he is often superficial and impatient and avoids going deeper into matters. The main defects of the character of Sagittarius are superficiality and simplicity; self-confidence can lead to arrogance and tiresome paternalism, restlessness risks causing contradictions between theory and practice, affecting life decisions and causing an uncertain and capricious trajectory of one’s destiny.

This is often marked by good results in the personal field and always accompanied by social sympathy and consensus, as well as by fortune, which hardly abandons the native. If there were one word that could define the character of a Sagittarius, it would be the word freedom. And with capital letters. If there were a second, it would be sincerity. And also with capital letters.

Although he may seem serene, a Sagittarius always booms inside and this constitutes a promise of pleasure for those around him. Tireless traveller and adventurer, fidelity is a vain word for him. In love, his restless and playful spirit ensures that his lovers are never bored and live surprise after surprise. Jealousy and the desire to possess are notions unknown to him. Although it is almost impossible for him to concentrate on one love, he does not use lies as a subterfuge to have more than one relationship at a time. He is genetically sincere. If he has to tell a painful truth, he will always find the right words to hurt his partner as little as possible, but he will not stay by his side just to avoid suffering.

Sociable by nature, he is a regular at society meetings, where he can become the ideal guest; he likes to have fun and tries to turn his life into a party, forgetting his darker sides. The person who is next to a Sagittarius will have the opportunity to discover the nicest aspects of life, but when he comes to the conclusion that the relationship is perfect and wants to reach a compromise for the future, the elusive Sagittarius will find a way to escape, because formal relationships and marriage are like a prison for him.

A Sagittarius lives and enjoys all the pleasures of life, and sex is one of them, which he will try to use as often as possible. He is a tender and passionate lover… for as long as it lasts….

In human anatomy, Sagittarius represents the legs, with special attention to the hips and thighs, the liver and the hepatobiliary apparatus, often the victim of disorders due to the native’s inclination to the pleasures of the table.