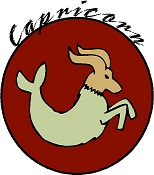 Key phrase: I USE

With the tenth sign of the zodiac we are in the middle of winter, the coldest and hardest season to go through: sleeping nature does not bear any fruit and it is therefore necessary to make the maximum effort to guarantee one’s survival. The land of Capricorn is hard and frozen, it is arid rock, it is precious mineral, although hidden. This is a severe sign, of austerity and determination, aware of the difficulties and capable of sacrificing ephemeral pleasures to achieve higher and more lasting goals.

The goat, the animal that symbolises the sign, climbs to high peaks on a solitary climb, is parsimonious when grazing and obstinate in the climb. This is how the native of Capricorn conducts himself: patient and tenacious, with little enthusiasm and few words, endowed with a remarkable ambition and a strong will.

Pessimistic and distrustful, he relies only on his own strength and, besides, he does not forget any detail, neither does he trust in luck or in the help of others. His objectives are precise, and he plans his action, sometimes throughout his life, to achieve them without any margin for error, organising himself with efficiency and foresight. Fundamentally materialistic, he attaches great importance to the more concrete aspects of life as a solid guarantee of his own future. In fact, it carefully doses energies and resources and is very well thought out and economical. However, it is important not to neglect ascetic behaviour, which on certain occasions can lead to more spiritual or philosophical paths, while it usually shows great dedication and ability to sacrifice for its own objectives.

He is rational, reflective, and has an analytical intelligence; he is a little slow in his actions, which are carefully meditated upon, and so he hardly makes any false moves. Independent and authoritative in nature, he prefers to act alone before giving up management positions.

His sociability is, in fact, limited; he always puts his personal goals first. Reserved and elusive, he keeps his emotionality under rigid control: he represses emotions and hides feelings, thus earning himself a reputation as a cold, melancholic and abrupt person. Indeed, he is not a prodigy of cordiality, as he often exceeds self-control and severe moralistic judgments that prevent him from being compassionate.

His feelings, slowly sedimented, are extraordinarily resistant to time; his esteem, difficult to earn, is eternal, which proves his great fidelity and dedication to the person he loves. Often, youth is not a happy age for the native of Capricorn as he gives too much space to bitterness, denying himself the joy of carefreeness and immersing himself in the weight of responsibilities even when he could do without them.

On the contrary, as the years go by, he is gaining greater self-confidence, while his pessimism may be tempered by having achieved the solid position he aspired to. As he matures he can feel greater satisfaction and achieve his primary goal: wisdom. The actions of the natives are characterized by a certain slowness and may require fatigue and zeal, without luck intervening in any relevant way; the potentialities of destiny are often fulfilled with a certain delay, but once conquered, the summit belongs to them forever.

The characteristic reserve runs the risk of becoming coldness and indifference towards one’s fellow men, distrust in selfishness, sobriety and parsimony innate in pure frugality close to greed. Ambition can degenerate into a craving for material possession, the indefatigable defence of one’s living space into harshness towards the weakest.

Capricorn is a sign full of internal contradictions that represents for its lovers an oasis of love and protection. Whoever loves him, must accept him as he is and learn to guess the tenderness he hides under his cold appearance. Distrustful and insecure in all aspects of his life, he prefers a gradual surrender, as he gains confidence. In this way, he tries to protect himself by not letting himself down. However, through the work and grace of the contradictions of the sign, they sometimes become entangled in complicated and unsatisfactory relationships and this happens when their passion imposes itself on their reflective spirit. From these episodes he is badly wounded and takes his distance again.

Since it is not considered important, you may be surprised if someone notices it and proposes a romantic relationship. Capricorn goes his own way, so the person who wants something with him will have to show more than obvious interest. And that’s when this native will take his time to reflect on his feelings. And this is not out of indifference, but out of fear of suffering, which is why, although he is passionate, he does not show what he feels, until he feels safe enough to ‘risk’ and no one will succeed in taking a promise from him until he considers it appropriate.

Sometimes his overcautiousness makes him seem too cold, and this attitude can alienate people from his side. Only Capricorn knows that underneath the coldness lies a passionate fire.

In the couple, as in all other aspects of life, he does not admit half measures. This makes him seem intolerant of certain attitudes and even feel betrayed. In reality, Capricorn will never demand from others, something that he does not ask of himself. What happens is that his moral rules are very high.

The need for security does not abandon a Capricorn even in intimate moments. To give himself totally and without reserve will need a lot of time and dedication and although he is passionate, he does not easily let himself be carried away by his instincts.

His materialistic side can sometimes make him more interested in his partner’s finances and if the person in question does not understand well why, the relationship can deteriorate.

Anatomically, Capricorn has the knees, the human skeleton, the teeth and the skin. The disorders are mainly of a rheumatic, arthritic or dermal nature.

The mind rules the heart