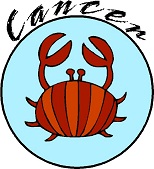 The fourth sign of the Zodiac begins with the summer solstice; the fruits of nature, which relax in a state of peaceful satisfaction, have already ripened. Its water is calm, deep, it is the clear water of the fountains, rivers and lakes, fertile and life-giving water, the water of the amniotic fluid: Cancer is the sign of motherhood, it evokes the maternal archetype, all that is refuge and protection. Sentimental and emotional values therefore assume the utmost importance, sweetness and affectivity are remarkable, but at the same time the anxieties and apprehensions of maternal anguish and the need for security of those seeking protection are also evident.

Cancer is related to childhood and often the still immature native retains attitudes or fears never forgotten that go back to childhood. This is because the native of Cancer has a tenacious memory that allows him to keep particularly vivid memories, tinged with nostalgia, of things already lived and romantically idealised, alive in the depths of his heart. Very close to the family, and especially to the mother, he feels deeply attached to his own roots, to family traditions, to the original environment, elements that often condition, in a negative and positive sense, aspects of personal evolution and destiny.

Being conservative in spirit and having a great devotion to the past, his capacity for initiative can be hindered by walking backwards like the animal of his symbol, the crab.

He does not lack ambition, on the contrary, he likes to be the centre of attention, since he is in fact an egomaniac, but he fears the hostility of the outside world and if he perceives an aggression, he closes in on himself, confining himself in his protective shell, in the secure love of the family, in the proven values, within the walls of his house, perceived as a welcoming refuge, and consequently very much loved.

Of a lazy and not very dynamic nature, the native of Cancer has, on the contrary, a vast inner world, built not only by memories, but by a lively imagination, by dreams and fantasies that only reveals those he considers safe and reliable, according to what his heart dictates. The sympathies he arouses are as outstanding as the antipathies.

His sensitivity is particularly lively and delicate, and his intimate vulnerability causes him melancholy and an acute susceptibility, the cause of an initial shyness. In spite of everything, the native of cancer is not a loner, he likes the company of others, and he is very affectionate and solicitous with the people he loves. As for his character, he lacks practical sense and is easily influenced, he does not have much strength of will and acts, mainly, moved by feelings, following the suggestions of his almost mediunic intuition.

On the other hand, he dedicates himself to his tasks with scrupulous meticulousness. Although he is rather peaceful and conciliatory in spirit, he can be obstinate in childish insistence or capricious and ineffective anger. In fact, his main defect is his decidedly unstable mood, which causes him to be called a ‘lunatic’ and prevents him from being understood by anyone who does not have his ‘sixth sense’. Laziness and insufficient inclination to struggle can make him too submissive, refractory to action, easily discouraged, often changing his mind, or chasing dreams instead of diving into concrete reality.

In reality, Cancer’s outer hardness is only a barrier that helps protect his inner self as he needs stability and is protective of others. Cancer is very possessive and defends relationships to the maximum because the very idea of losing an affection hurts him. His protective spirit leads him to express his love through collaboration with his partner and if there is something he hates, it is the unexpected.

Because of this excessive caution, he never abandons himself fully to a passion if he does not know the other person well; in fact before expressing his feelings, the crab will want to know everything about the other and be sure that he will not be rejected. Only then will he reveal his true sensual nature.

In reality Cancer is very insecure and this can only go away if you manage to have complete trust in your partner. He will then surrender without reservation, but most of the time this insecurity will lead to possessive displays, which can be difficult to live with if your partner needs a little freedom.

The loyalty of the natives of this sign is proverbial and your partner will not only enjoy your fidelity but also a true devotion. Actually, Cancer loves to pamper and take care of his partner, but he also needs to be surrounded by a tender and secure love.

The weakness of these natives is their constant mood swings – ‘lunatics’ like their ruling planet the Moon – and often these changes are disconcerting to their partner who cannot understand them and as Cancer is subtle and gentle, he expects the same from others, feeling hurt and disconcerted when he does not, as he often does.

Pessimism is another of his characteristic traits. Even if everything goes smoothly – especially at such times – the crab will always live in fear that events will take an unfavourable turn, so it will avoid making decisions with unexpected consequences because, wounded, it will never forget.

Their fate depends to a large extent on their starting conditions, their family environment, the education they have received and their family heritage, whether symbolic or material.

Success, often slow, matures little by little. The role or the memory of the maternal figure remains, even in adulthood, very important, especially for the male natives.

Anatomically, the sign of Cancer governs the stomach and digestive system, the thorax, the mammary glands and the belly. You also have to pay attention to your diet.

You are easily hurt