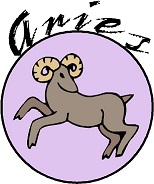 Key phrase: I AM

Aries, the first sign of the zodiac, corresponds to the beginning of spring. The same symbol evokes the awakening of nature as an explosion of creative and impulsive energy, fuelled by a raging fire that determines in the temperament ardor and impatience. Courage and boldness taken almost to the point of unconsciousness. Virile values, arrogance and active self-assertion prevail.

The consciousness of the individual is primarily self centred, the vigorous impulse towards activity and the conquest of the future by the Self, the stages are burned out in impatience, the past is forgotten, and the present is a brief moment, to be lived immediately and intensely.

Linked to the age at which one is young and the exuberance characteristic of youth, it is a dynamic, innovative sign of outstanding self-centredness; yet it does not fail to show respect for order and hierarchy, a clear manifestation of the principle of authority. Intellectually, although he is distinguished by his vivacity, and his curiosity to know in order to progress, he is not very prone to subtleties, but rather follows a definite line and allows himself to be influenced only by his own enthusiasms. On the other hand, fantasy is not absent in this sign; on the contrary, it is particularly alive, epidermal and provocative.

The native of Aries is an individualist who aspires to fulminating successes and positions of relevance, conquered in a manifest struggle, in which he spares no energy. Combative and confident in his own possibilities, he is not prone to nuances and compromises, always taking clear and determined positions, unaware of the art of diplomacy and psychology.

Full of initiative, he throws himself into his activities with impetus and tends to get excited by an idea or an ambition. Not very inclined to plan, he becomes disillusioned when things do not go as he would like, but he easily recovers his optimism even after unexpected moments of discouragement. He is endowed with a great will, which however lacks tenacity: he finds an intense and brief effort much more pleasant than a more modest but also longer work.

His will is the spring that impels him to act; he always tends to impose himself by force, although without malice; he is rather naive and, even in the numerous conflictive occasions in which he finds himself due to his brusqueness, he always behaves sportily and detests deception and low blows.

Of a lively and rebellious nature, he does not care too much for the opinion of others; the main thing in him is to keep alive the flame of his enthusiasm which tends to fade away in monotonous or limited situations. Being very independent, he does not tolerate impositions and tends strongly to exercise command.

As a negative factor, his spontaneity can lead him to be brutally instinctive: aggressiveness, blows of anger, arrogance, imprudence and inconstancy are his main defects.

The native should learn to cultivate constancy and patience, to control the impulsive features of his temperament that often make him make enemies even if he does not want to. His ardent nature is prone to be inflamed with passion for a person, for a project, for an ideal. On the other hand, he tends not to notice the faults of others, or the negative aspects of ideas or situations, and so falls victim to disappointments.

The destiny of the native Aries is often subject to movements and struggles for personal affirmation, it is not rare to see brilliant successes already in youth, often followed by unexpected alterations caused by a change of interests, desires or by unwise decisions. Their existence is often determined by radical changes, dictated by impulsiveness, but offers repeated opportunities to gain a lost position.

In love, the Aries native can become passionate, tender and loyal. But until he finds the partner who allows him to develop these qualities, he will only show the first one. His gaze often radiates a great attraction that is difficult to resist.

As he detests routine romances, he never tires of surprising and amusing his partner every day with his audacity and humour. She feels good flirting and seducing. He lives each relationship as a real challenge. He loves the thrill of conquest, but usually once this is achieved, he usually loses interest.

However, when she truly falls in love, she becomes more vulnerable and shows all her tenderness. Despotic and egocentric, he then lets his most generous aspect emerge and gives himself up without reserve, although with the direct style that is an intrinsic part of his personality. Aries rarely gives up his desires, and not even love will manage to make him give up his whims. His will must be fulfilled as if it were a law and if this does not happen he can withdraw from his partner. Making concessions is very difficult for a true Aries, as he always puts his personal interest before that of the loved one. His standards are so high that he cannot stand by someone he does not consider a winner.

Anatomically, Aries corresponds to the head and its organs: skull, brain, eyes, teeth, nose, ears and face are therefore subject to alterations.