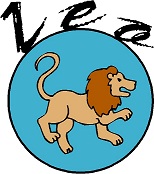 To Leo, the fifth sign of the Zodiac, corresponds the very heart of summer, the apex of solar heat, the moment of maximum exuberance of nature, which generously offers its fruits; the burning fire of Leo radiates, gives heat, a source of inextinguishable vital energy.

Leo is, in fact, a sign of supreme vitality, great and energetic in all its manifestations: just as the sun shines with its own light. Leo proclaims the highest awareness of individual value and personal creative potentialities.

Definitely egocentric, the native places himself at the centre of his own world, and imposes himself on others; ambitious, daring, proud of himself, his feeling of self-assertion is so ingrained, that the exercise of authority is his most logical vocation. Optimism and unlimited confidence in one’s own abilities make him a subject with plenty of courage to face up to obligations and risks; defeat is not part of his vocabulary and he achieves often brilliant successes thanks to his enthusiasm and the will to act correctly that drives him to offer the best of himself.

Although he is tenacious in his desires and ambitions, he cannot bear setbacks and does not know how to adapt to circumstances that he perceives as inadequate or limiting; like the Sun, he would like the world to revolve around his wills. His great creative qualities stimulate his no less vigorous dynamism, suggesting to him ideas and occupations that take him away from the average; the native of Leo is not made for small things, he does not know modesty, he aims at great results and his winning weapon is precisely the conviction, as a starting point, that he will win.

However, he risks underestimating the problems and neglecting the details that escape his attention. Overconfidence leads him to attach little importance to enemies and adversaries. This is his real weakness, since, convinced of his absolute triumph, he never considers alternative plans.

Of an ardent and generous nature, he trusts his fellow men towards whom he behaves loyally, and from whom he expects to receive similar treatment; he is easily deceived and is disillusioned in the face of betrayal.

His mind is quick, synthetic, organising, of broad conceptions and ingeniously risky ideals, sometimes too much to realise, for the truth is that the Leo native sins of lack of realism.

Endowed with great strength of character, demonstrated by his protective and confident attitude, the subject feels the need to attract attention, inspires admiration and knows how to influence those around him; his heart is generous, but demands unconditional trust and submission, as expected from a king of the jungle.

His feelings, sincere and enduring, are free from pettiness and accompanied by a powerful sensuality. Love often occupies a primordial place in his existence and evidently, the king displays all the magnificence of his majesty in this field: very expensive gifts, flowers, effusive declarations not exempt from theatricality… his partner will have to get used to everything except discretion.

Actually, Leo’s magnificent side has quite a few childish nuances, although the freshness of his intentions is one of his greatest charms. Leo does not know the half measures and so when he falls in love, he turns completely to the person loved to the point that some might label him as an exhibitionist. If that person meets your expectations, Leo will swear eternal love and absolute loyalty, as it should not be forgotten that Leo is one of the most faithful of all the zodiac. But to keep that flame alive, Leo needs attention and care that makes him feel important, but, convinced of his partner’s love, he can become a little careless, since, once the conquest is made, it does not occur to him that that person needs something more than his mere presence.

The security he shows in himself is one of his greatest attractions and charms, but when those qualities turn into arrogant vanity, he becomes intolerant and unintelligent since he will do anything to get compliments and keep his prominence at all costs.

The native of Leo is strongly attracted by pleasures, by anything that is luxurious and brilliant; he is seduced by challenges and competitions, anything that gives him strong emotions.

As a negative factor, self-satisfaction can lead to excessive susceptibility, security to arrogance and presumption, vigour to anger and lack of sensitivity, and command to despotic authoritarianism. The need to be noticed can make the individual too vain and sensitive to praise; ambition is in danger of being insatiable will to dominate.

Stubbornness and conviction in one’s own opinions can give rise to an immovable disposition, wrongly convinced of the immutability of the present and the acquired right to certain privileges. In facing his existence, the native always aspires to relevant objectives and often manages to occupy important positions – at least in his own environment – and to ensure a satisfactory material prosperity; the standard of living is also high, since a Leo either abandons his grandeur even in the private sphere.

Anatomically, the sign of the Leo is related to the heart and to the cardiovascular functions, the back and the spine.

It often shows a robust constitution, capable of great muscular efforts and easy recovery, although subject to febrile and inflammatory states.

Concerned about the social situation